Today we have been sneaking into the feild to race so we could write about the race.So first we had to wait for mr moran to let us go line up. So mr moran first  called out every singal group at the right time so everyone would not get pushed. So next when everone was outside we had to put on our shoe or go bear feet.Then when  everyone  was outside we lined up in 2 lines one boy line and one girl line.Then Everyone was ready to sneak pass the classe. So first befor I lined up i felt nervouse so Iwas shakeing with fear but I still had to run for our writting. Then we all walked down quitely to room 17 and sat on the conncrete and waited for our turns so first mr moran counted each girl and boy. After he was done counting us he spite each girl and told them to get in a lane. So first the others girls raced then


Finally it was my lines turn to run so i stayed normal and went into a line.Then i waited for mr moran to clap a weird thing it was like 2 blocks sticked togther but not with tape so when he claped the 2 blocks togther I ran as fast as i could and i used all the energy i had left but i did not make


At last everone was finsh racing and the winner was mr moran and afer that we went back to class to do this writting...see you later. 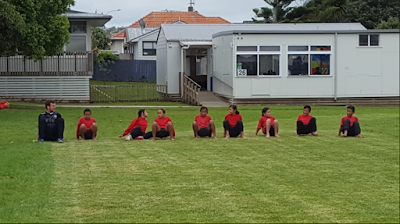 Email ThisBlogThis!Share to TwitterShare to FacebookShare to Pinterest
Labels: 2017 writing 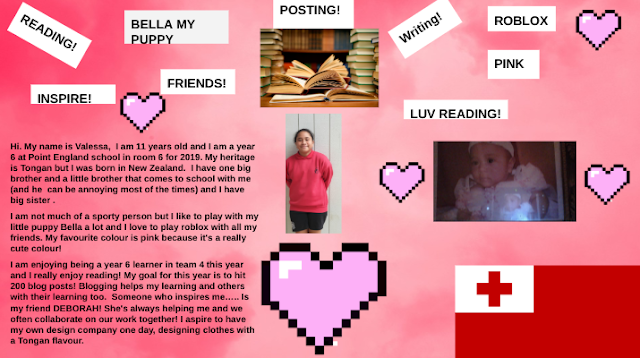 Kia ora! My name is Valessa , Welcome to my blog for 2020! But first let me introduce myself for 2020 . My name is Valessa. I am a year 7 learner in Room 5 Intermediate at Point England school In Miss IIaoa’s class , I am 11 years old turning 12 in a few more months and I'm pretty excited for this year and a lot nervous at the same time . My hobbies I usually do are writing and reading, at times I read, at times I write for fun . I am a bit too quiet and I don't really like raising my voice. I'm a very shy girl who isn’t very confident at speaking in front of more than 10 people or more! My favourite colours are pink , black , and white! , I enjoy painting and colouring and drawing even if I may not be the best at it but it's something I enjoy doing (: I also like to eat sushi because I love salmon and rice with soy sauce. Also I like tuna sushi! I have 2 brothers, one older that's 23 years old and one younger that is 8 years old. I also have 1 sister that's 13 years old that just started college this year in 2020 .